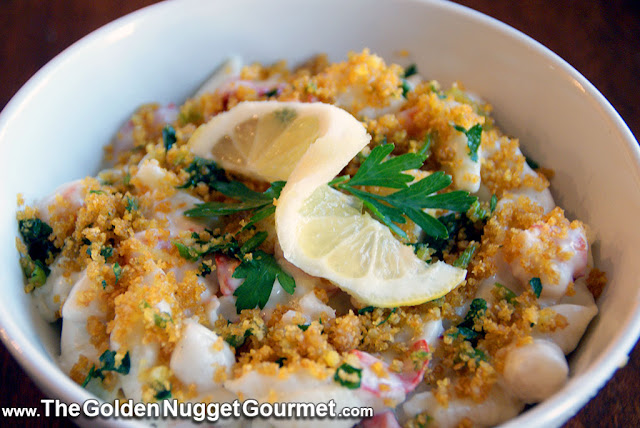 Look no further, this Lobster Mac and Cheese Recipe from Cal Hancock, owner of Hancock Gourmet Lobster Co. in Cundy's Harbor, Maine, is the one you absolutely have to make.

The first time I had Lobster Mac and Cheese was Fall 2007, when my in-laws Stuart and Joanne threw a cocktail party to celebrate our wedding with family friends who couldn't make it to Ogunquit, Maine for the ceremony. We had a lobster bake at our wedding reception so it naturally tied the events together when the caterers served this savory dish as one of the several appetizers at their party. Everyone raved about the lobster mac, a combination that seemed relatively unheard of at the time...at least we had never heard of it, but one bite and we were all hooked.

Last week while vacationing in Virginia Beach we had phenomenal dinner with our friends Chris and Trista at HK on the Bay. I had ordered a Tri Tip Chimichurri Sirloin with a side of Lobster Mac and Cheese, both were cooked to perfection. I decided that when I got home, I was going to try and make this mac and cheese delicasy.

I started perusing the web for "the best" lobster mac and cheese recipes and the stand-out was Cal Hancock's. Obviously my choice to try was heavily influenced by the fact that she had won a throw down with Bobby Flay. Scott took one bite and said, "superb!"

Being from New England, I'm accustomed to running into the local grocery store and selecting fresh lobster from the tank, and even having it steamed right then and there if I'm in a hurry. Unfortunately, it's not so easy to do in Maryland. While in Giant, I went with a package of frozen lobster from Cozy Harbor Co., a company from Portland, Maine.

I used Cal's recipe to make a seafood mac and cheese. Instead of using only lobster, I added one cup of bay scallops and one cup of shrimp. Again, you would never know the seafood was previously frozen, everything came out extremely tender, and it substantially cut down on prep time due to the lobster and shrimp being pre-cooked.

A scrumptious crust made with panko crumbs, lemon zest, butter, and fresh herbs, and parmesan delicately tops this dish (though it would be just as delicious without it if you'd prefer). This is a very rich mac and cheese that can be served as a main dish or makes a very impressive side.

January 08, 2019
After my dad retired from over 40 years of paper mill management, he did a short stint working at Moe's Southwest Grill before he and my mom moved down here to Maryland. After working a shift, he would often bring home Moe's famous queso and heat up their fresh tortilla chips in the microwave. I started craving Moe's queso, this unique white cheese dip packed an addicting heat that I had never had at any other Mexican restaurant. I started searching the web looking for the best copycat recipe and found the closest replica at Seeded at the Table. I think it's right on the money!

August 10, 2017
Whole Foods opened up across the street from our neighborhood. Like, literally, across the street. It has been a long time coming and highly anticipated, so when they finally opened their doors, I went THREE times on the first day! The ever-changing salad bar is our bank account's downfall. Every day at noon it keeps calling my name, taunting me with quick, easy, and healthy options for lunch when I'm hangry.

I always get a little bit of this, a little bit of that, and a bigger receipt than I had hoped for. So, I decided that I would start making batches of these sides in my own kitchen so that I could enjoy them all week long without the guilt. You can purchase the Whole Foods Market Cookbook on Amazon!

First up, one of my absolute favorites, the Indian inspired Cracklin' Cauliflower! It's so good that I recommend making at least a double batch!

October 21, 2013
Bobby Flay's Lemon Rosemary Marinated Grilled Halibut recipe came highly recommended from my soccer friend Little Lisa. She has very good taste in EVERYTHING so I knew I had to try it after she raved one night before stepping out on the field. Easy to make and bursting with flavor, this fresh fish dish is a keeper!